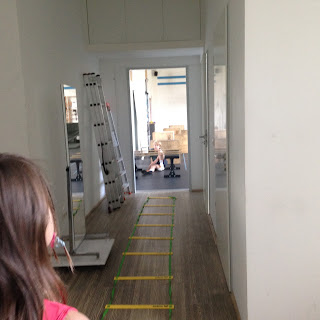 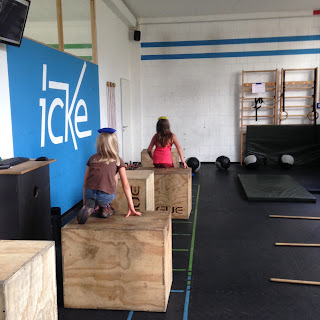 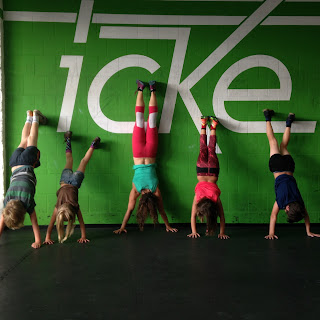 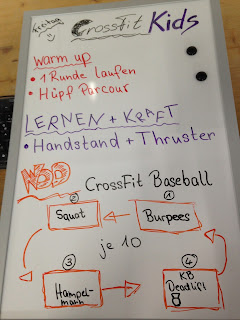 The Kids Class on Friday is growing. Last week there were 7 (actually 8 but but one of the kids forgot his sport clothes), the week before nine kids. I am really happy about the progress, the only thing that worries me, is that it is hard to do the class with just one coach because you have to teach the class, look at the movements and take care of the little ones. My youngest girl is 5 1/2 years old,very talented but also a bit shy... Next Friday another Newbie will be coming to class. I actually was thinking about offering two Friday classes...
Eingestellt von Wanderlust.Ari um 22:07 Keine Kommentare:

I started a new Class on Monday. It is a Pre-Teen Class, there are kids between 11 and 15. Most of them are also playing Rugby and use CrossFit to get stronger, work on skills, endurance, power and speed. I really like teaching them and it is great to see their progress. We do a lot of gymnastic work like pull up progression, working on the handstand and of course, using our own body. I do the programming on my own, sometimes using the CrosssFit Kids post on instagram to gather some ideas and I also bought new books to get deeper into weightlifting and fitness training for kids. It is really interesting and I learn so many things as well.

In two weeks I ll start teaching to gymnastic classes at an English School in Berlin. It is also from our CF Box and I will include CrossFit movements but more from the gymnastic and bodyweight area. I was thinking about trying to bring the CF Kids program as an official program to schools, still reflecting and planning on this idea... :)
Eingestellt von Wanderlust.Ari um 22:17 Keine Kommentare:

CrossFit Kids is still running @ Icke but with all the school work and my own training it is hard to keep my blog updated. Right now we are running a Friday afternoon class. The Rugby boys are back on the field and I have four new little CrossFitters. The class is about 30 minutes and so far I do a lot of bodyweight stuff, obstacle courses and introduce new movements. I am not including a wod for time or rounds because I first want the kids to train together, have fun and not competing against each other...
Eingestellt von Wanderlust.Ari um 22:20 Keine Kommentare: 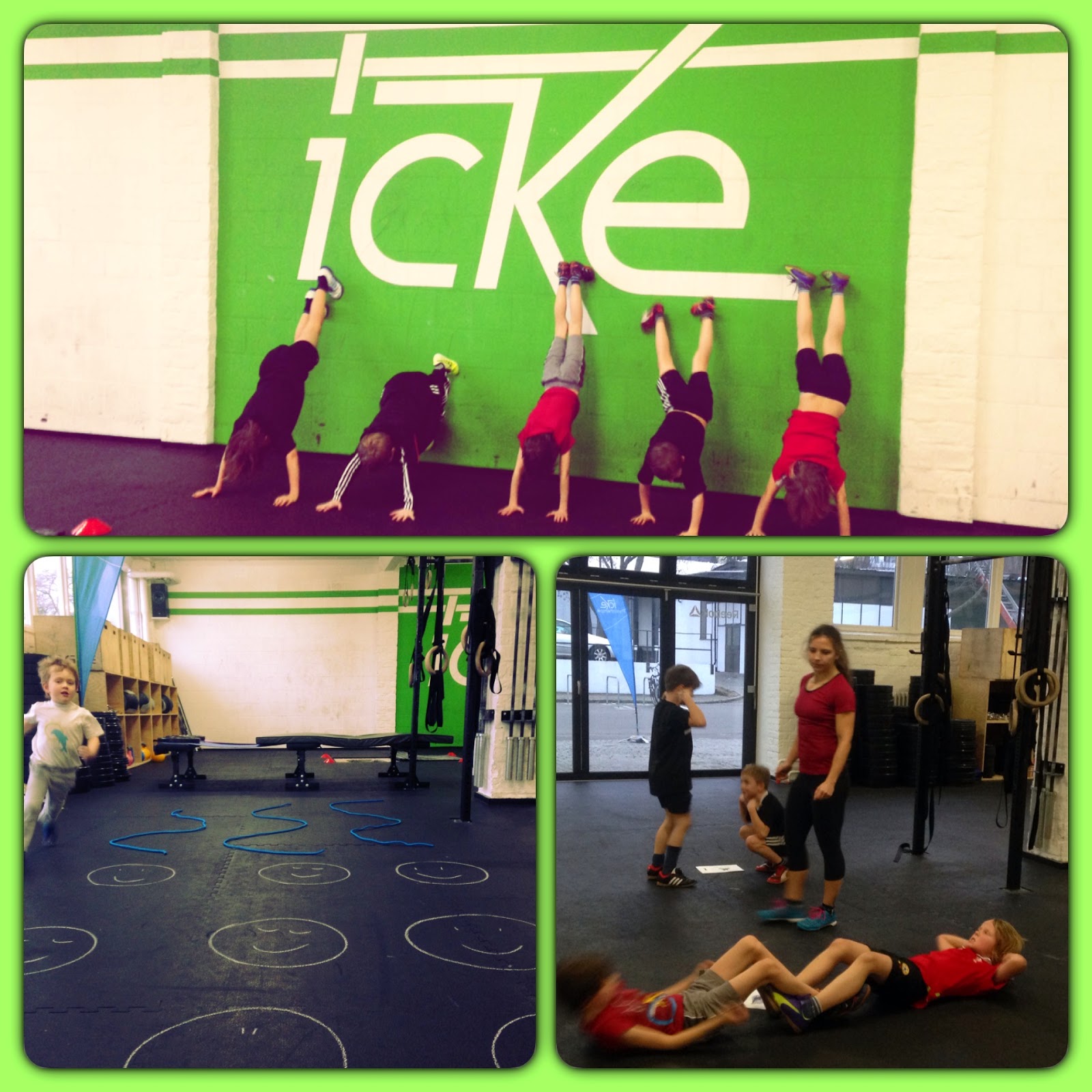 Today we were only three kids, the youngest was sadly sick.

The 2nd preschool class focused again on the squat. Repetition is very important at this age. So the focus during the first weeks will be the squat. Every class we want to focus on one aspect of the squat. This time it was the stance. I drew big smiles on the ground, using chalk (what else ;) ). The kids had to stand on the eyes of the smileys which was the squat stance. We worked a couple of minutes on the squat, chest up, look at your hands, stay on the eyes. Afterwards we did the warm up which was also a freeze game but this time the kids had to jump on a plate when the music was over (Island hopping). They ran between the circles, we changed the movements: bear crawl, jumping, backwards running...)

The wod was similar but this time they could do the obstacle course on their own, at the end of the course there were some small softballs (not too small, tennisball size), Everytime they finished a round they could take one ball and bring it back to their start point. So they and we kept track on their work. This worked out really well and I wan to include things like that more often, also during the older kids classes....

Fokus
Squat (smiles on the ground for the stance)
Warm Up
Freezing Game "Island Hopping"
There was a marked square and inside the plates to jump on when the music stops (doing one perfect squat before moving on), using different exercises (running forward/backward, bear crawl, crab walk, jumping...)
WOD
Obstacle Course
3 smileys, jumping from smiley to smiley
balance on the rope
tunnel (mat and two boxes)
taking a softball and running back to the start
schnell zurück rennen
Game

Here would be little markers (carpets) helpful, so the you actually can see the spots on the ground where the kids sit. 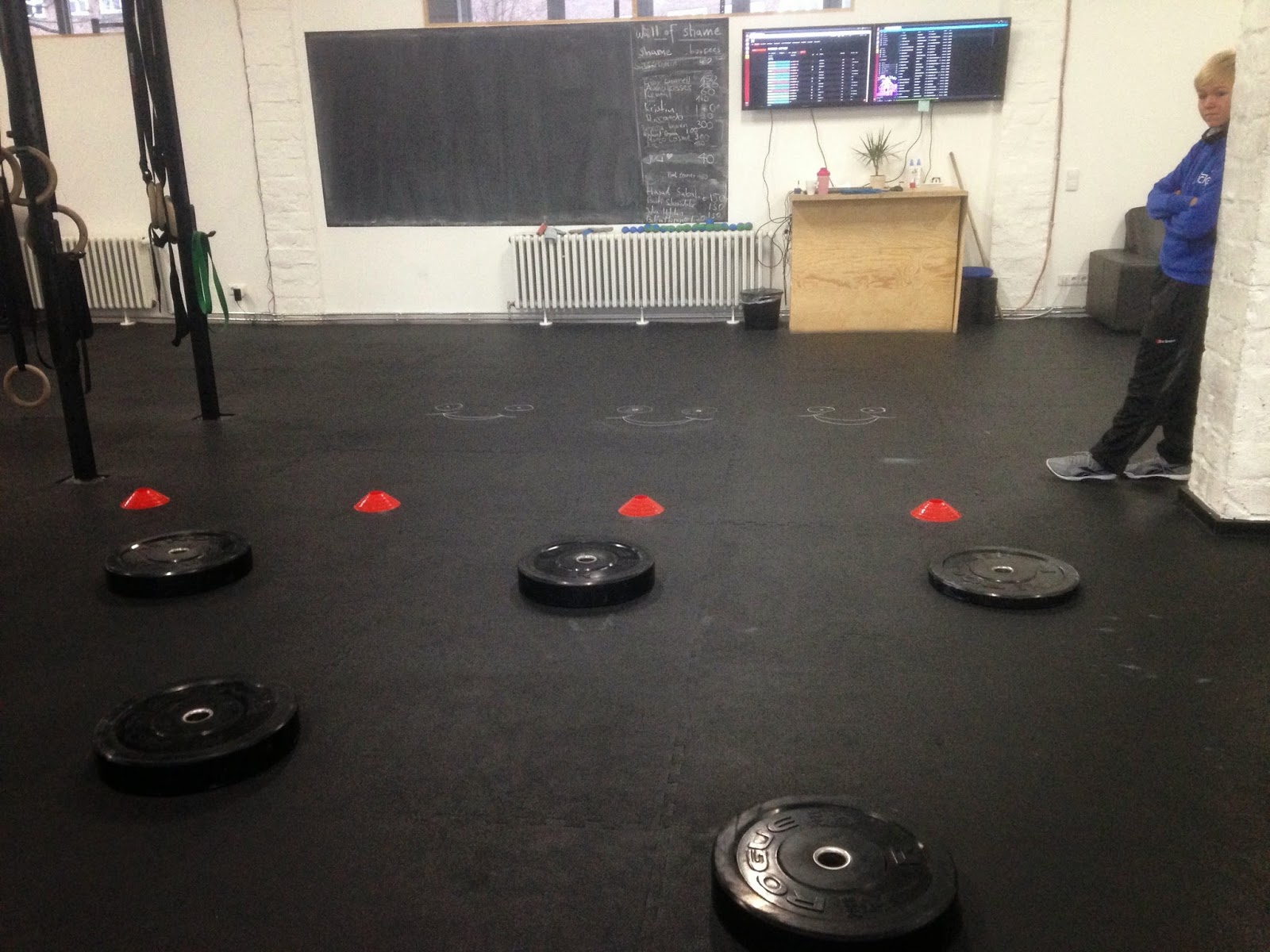 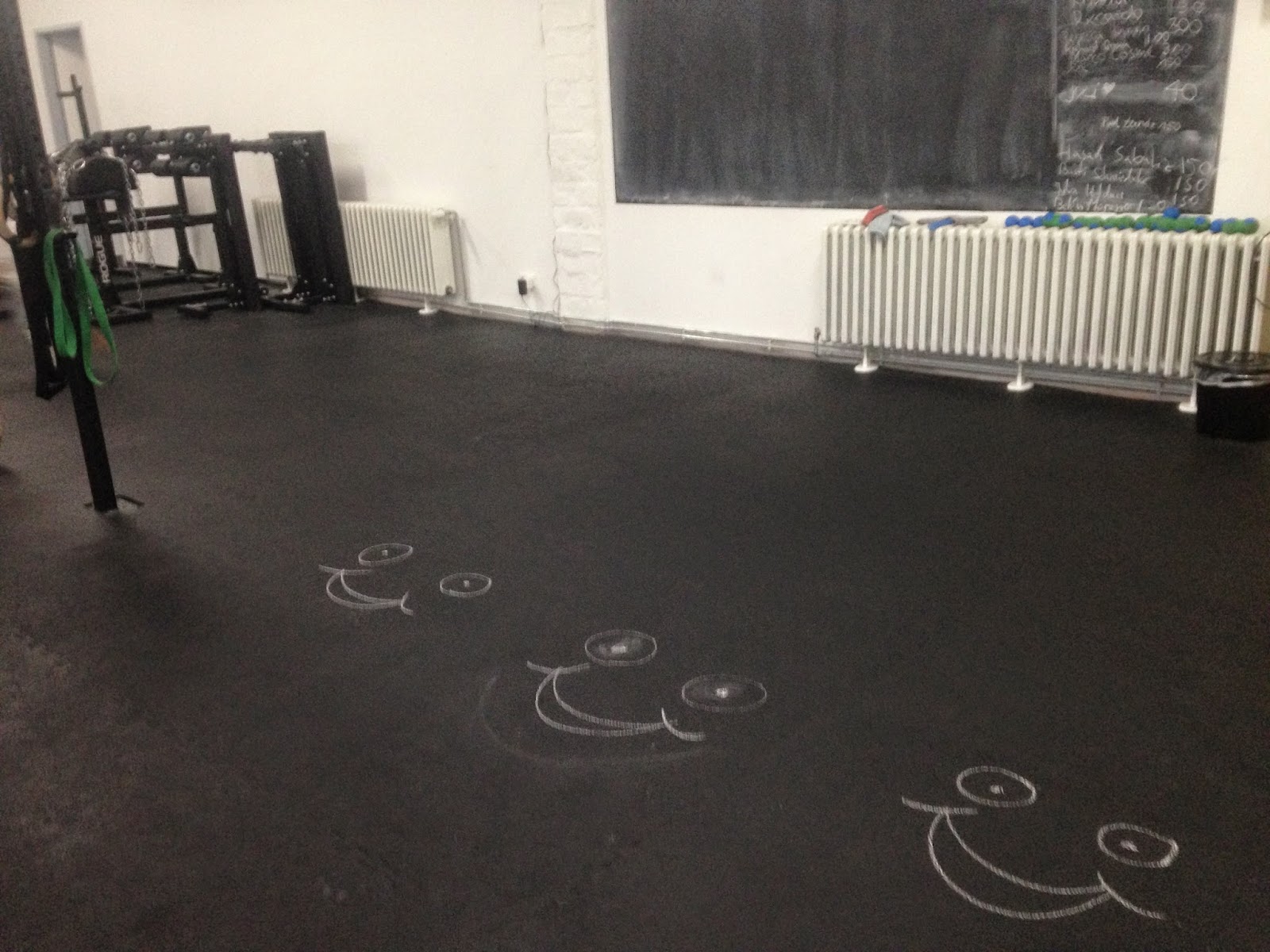 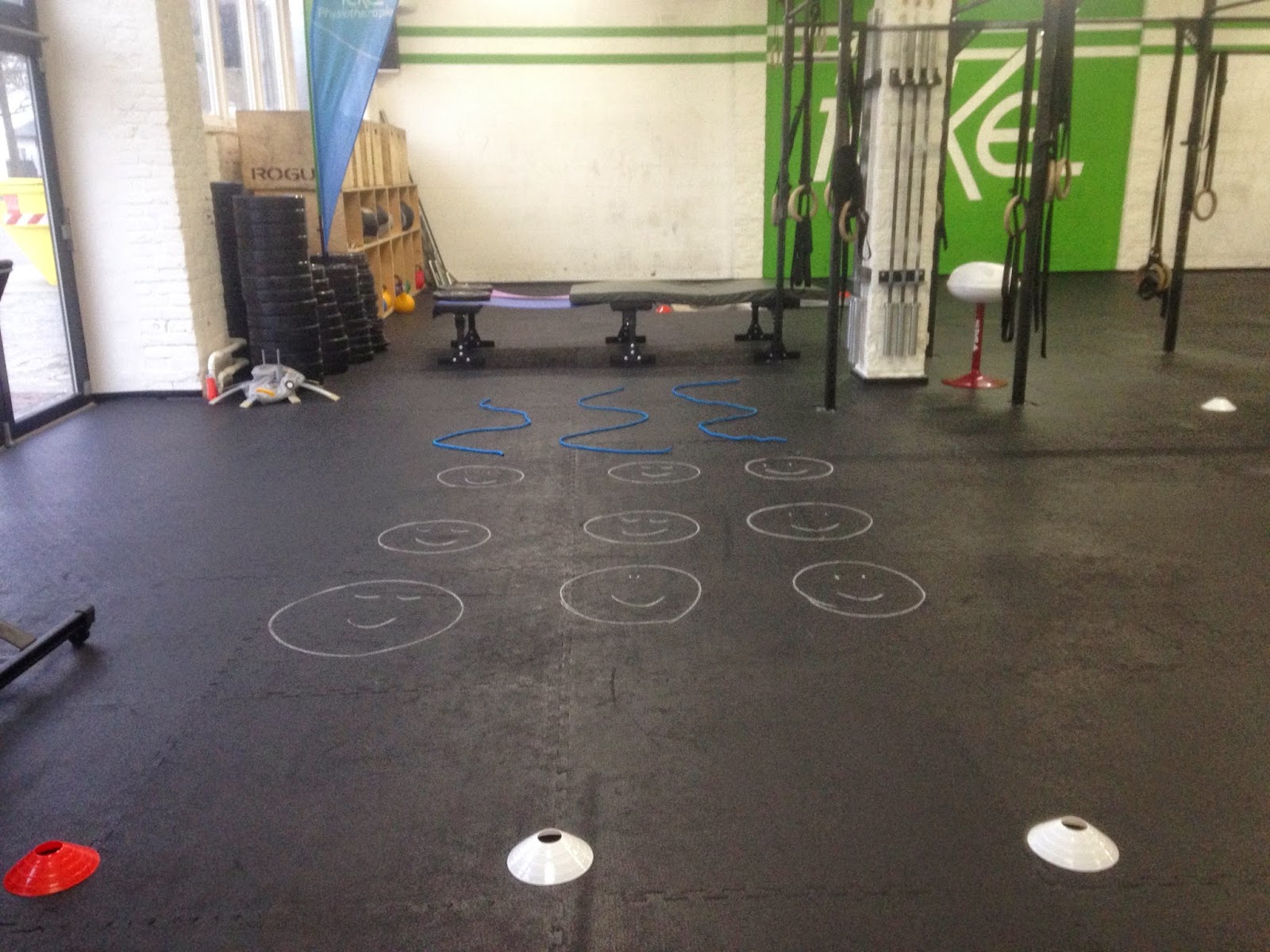 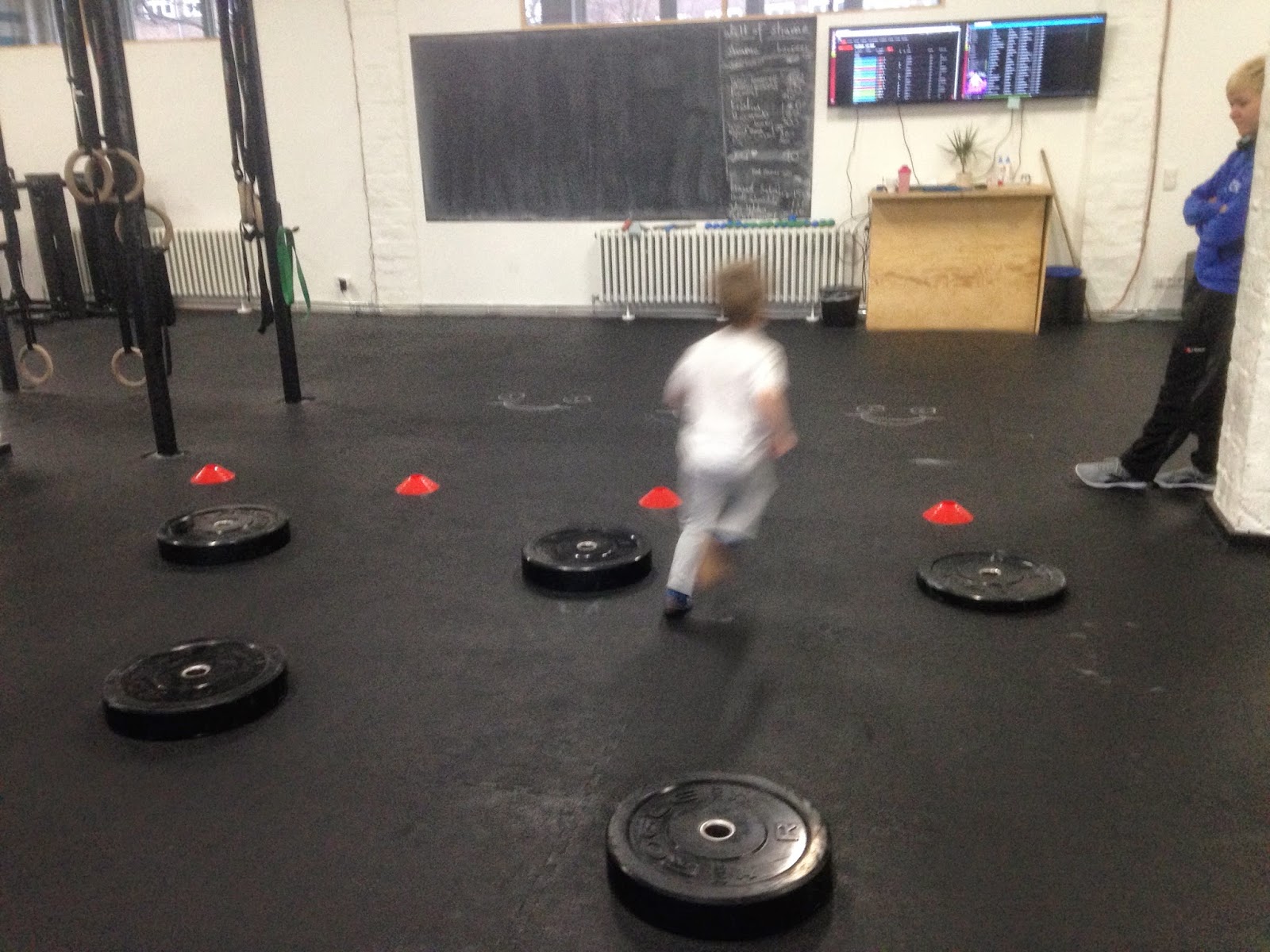 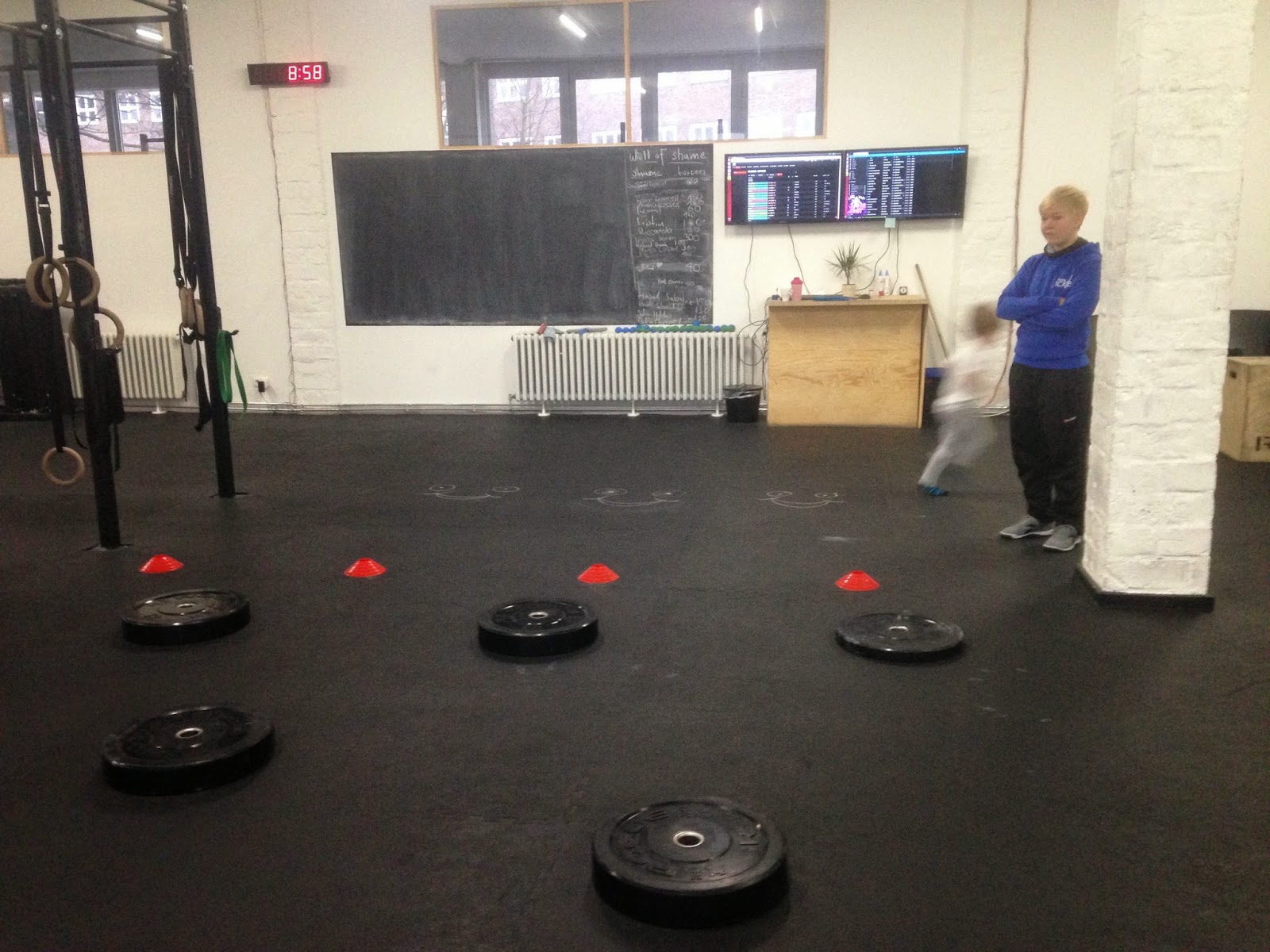 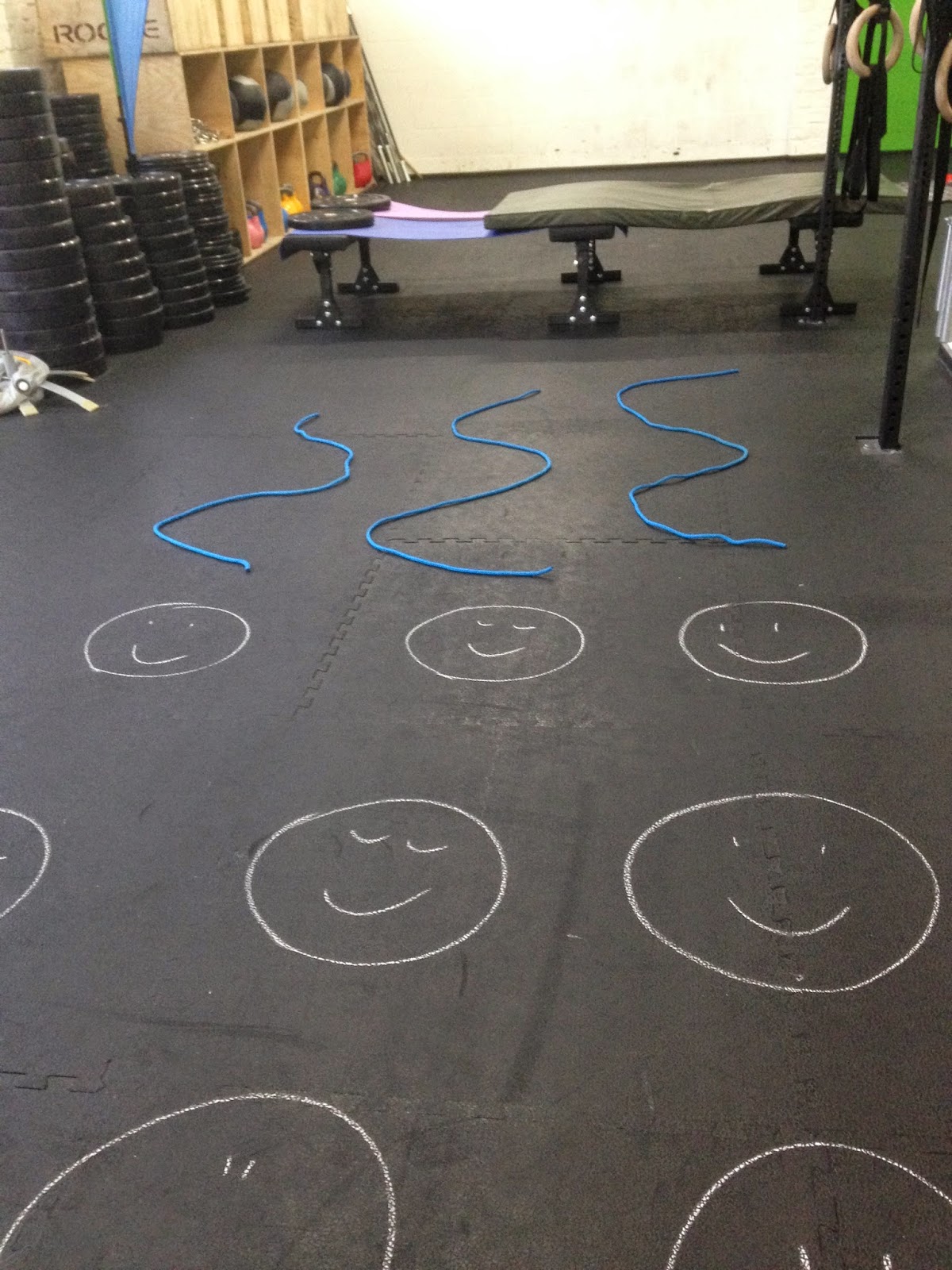 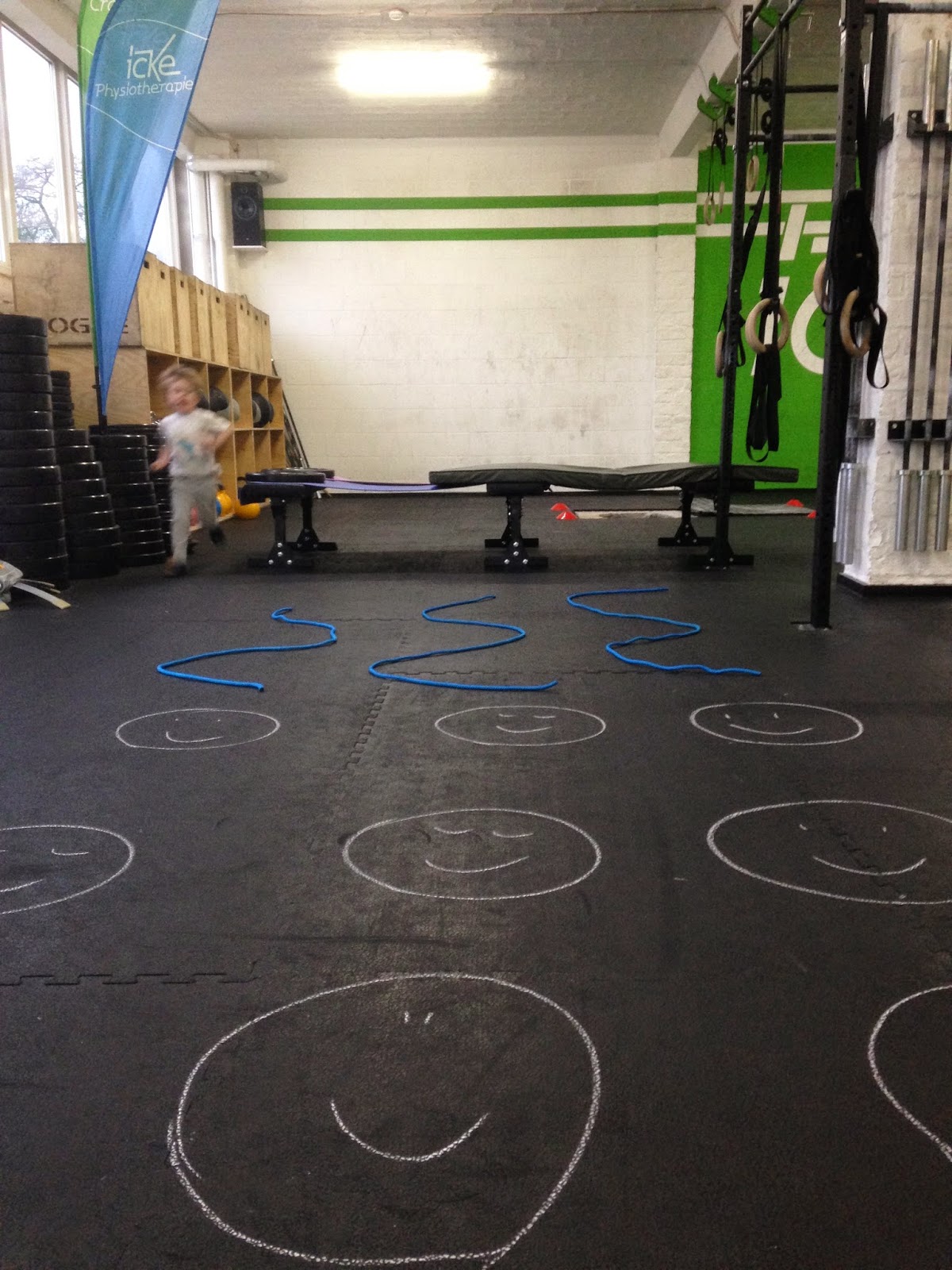 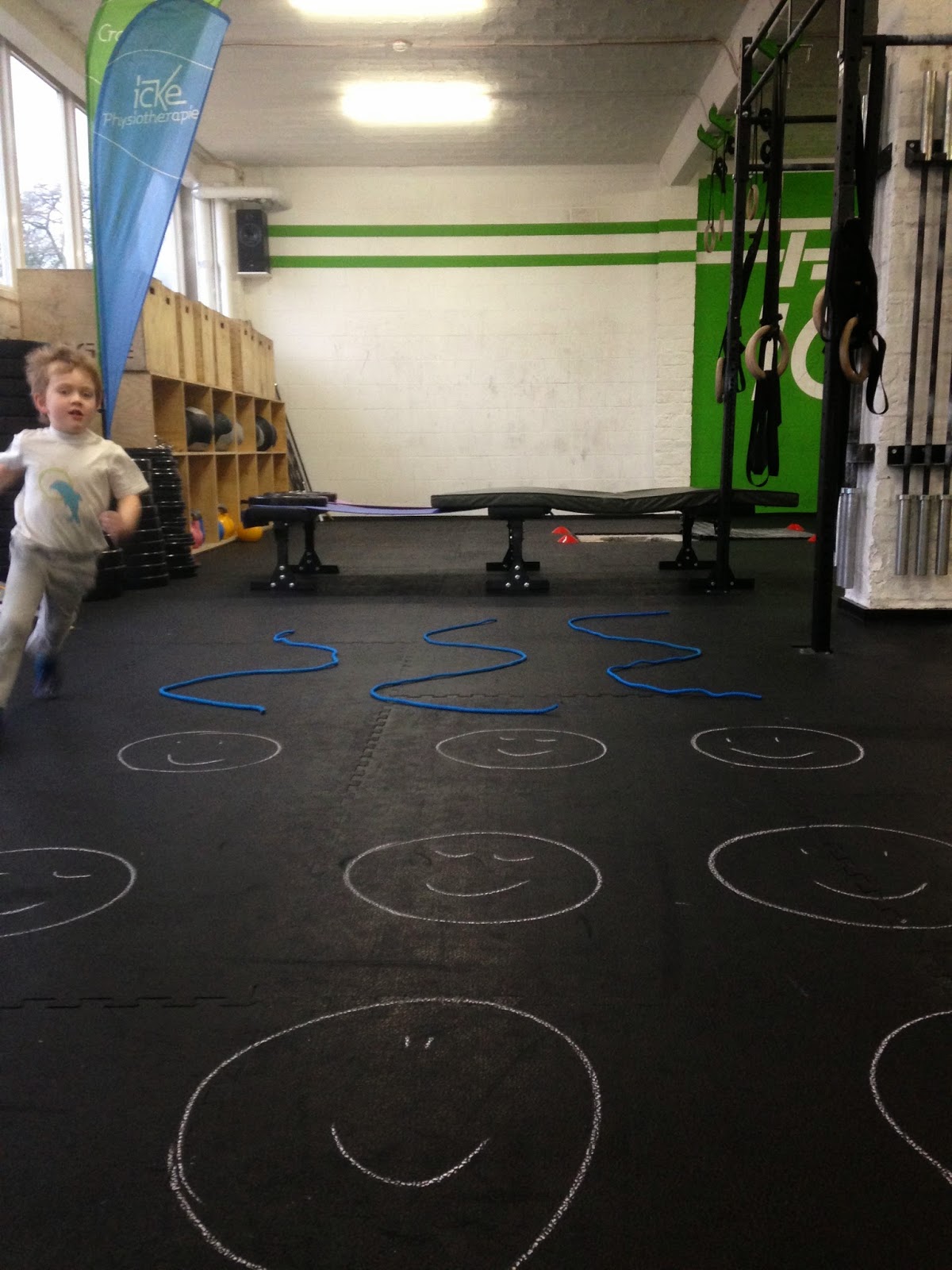 
I was really nervous about the first class.
Are the kids motivated?
Do they like the games and the WOD?
Is it age appropriated (too easy? - too hard)?
Will they understand our directions?

We had three little ones  (3-4 year old preschoolers) and one six year old girl (kindergarten, last year). We were two coaches which is necessary to focus on teaching, entertaining, modelling and helping.

The kids were really cute and we enjoyed the class. We introduced the squat with very easy cues, did some games and a little wod at the end. It was a very short lesson but on purpose: We wanted the kids to be motivated during the whole class and having lots of fun, so that they want to come back. It was also the first class and the introduction to it.

Here is the WOD:

Fokus
Squat
Warm Up
Music Freeze Game
The kids ran around a circle. One of the coaches ran with them.
WOD
We had a little area All did the wod together at the same time. The coaches modelled. It was kind of a very small and easy obstacle course. We did one very slow round and three faster rounds.
3 squat
bearwalk
3 box jumps on plates
balance back on a (jump) rope
Game
It was a really easy little on. We sat in a circle. One kid got a ball and had to run around the circle and go back to his/her spot. The the kid gave the ball to another person.